For some people, choosing a life insurance beneficiary is easy because they already have this person in mind when they start shopping for a policy. But did you know that you can name multiple beneficiaries and that there are several ways to designate them?

Your beneficiaries are the most important part of your life insurance policy, but if you don't name them correctly, your death-benefit payout might not go to who you want it to.

Here's what you should know about designating a life insurance beneficiary and how to ensure your wishes are carried out.

What is a life insurance beneficiary?

A life insurance beneficiary is the person, people, or organization(s) that receive the policy's payout when you die (assuming you die while your coverage is active). Naming a beneficiary will trump your will, and the payout typically won't have to go through probate. That means your heirs could receive a payout from life insurance more quickly than anything else you may leave them in your estate.

But naming your beneficiaries isn’t just a matter of jotting a few names onto your application. There are several kinds of beneficiaries, and how you designate them could change who receives the life insurance payout at claim time.

Who can I choose as a beneficiary for my life insurance?

There are few restrictions on who you can make a life insurance beneficiary. The recipient can’t be a minor (see below for tips on leaving a life insurance payout to a child), nor can it be a pet. (Sorry, Fido).

People usually choose those closest to them, such as a spouse, children, parents, or siblings. But you can choose just about anyone—including the following people or organizations:

You can also leave life insurance to a generalized group of people, but the more specific you are in how you name your beneficiaries, the less room for dispute later. Instead of leaving the payout to "my children," consider naming each child. Then assign a percentage of the payout to each.

With some beneficiaries, life insurance payouts can grow more complicated. So check out these tips for avoiding pitfalls with payouts.

Designating a minor as a beneficiary

Legally, a minor can’t directly receive a life insurance payout. If you name someone under age 18 as a beneficiary, their guardian may receive the payout instead.

You can get around this obstacle by designating a trusted custodian who can manage the funds until the child turns 18 or 21 (depending on your state’s laws). Or, you can create a trust to hold the money until the child grows up. When combined with a will and a reliable executor, you can designate the age at which funds are distributed. And you can require that the funds be used in specific ways, such as to pay for college.

If you want to leave a life insurance payout to a minor, consider working with an attorney or financial advisor.

Designating an estate as a beneficiary

If you don't currently have a specific recipient in mind or you want more control over how the proceeds are spent, you could designate your estate as your beneficiary. If you do so, the money will go to the executor of the estate. Unfortunately, these funds may have to pass through probate first, which could result in delays and additional taxation. And if you leave this world with any unpaid debts, your creditors may have a crack at that money too.

Still, adding the payout to your estate could give you the power to decide how your heirs spend it—that is, if you have a will in place. You can work with a lawyer to create one, but if you’re more of a DIY’er, check out the estate planning tools at Fabric.

Designating a charity as a beneficiary

If your spouse, children, and other loved ones don’t need your life insurance money, you could leave your life insurance payout to charity. If you went this route, you’d name the charity in your policy just like you’d designate a person: as a primary or contingent beneficiary.

Unfortunately, leaving the payout to charity won’t score you a tax write-off like making a direct donation would.

If you do have loved ones who need your life insurance payout, but you still want to give to a good cause, consider adding a charity rider to your policy. Not all insurers offer them, but some do. Forester’s includes this rider for free on most of its policies. Such a rider will pay the charity of your choice a percent of your death benefit—without reducing the payout your loved ones receive.

The first choice you'll make when designating a life insurance beneficiary is whether to make them a revocable or irrevocable beneficiary.

You can name more than one recipient for your life insurance payout. How many depends on which insurance company you choose, but most insurers allow for quite a few. Haven Life, for example, allows up to 10 primary and 10 contingent beneficiaries, for a total of 20.

If you want to name more than one beneficiary, you’ll need to decide whether to designate each person as a primary or contingent beneficiary.

What is a primary beneficiary?

A primary beneficiary is someone you want to be first in line to receive your life insurance payout, and you can choose one person or several people to fill this role. If you designate more than one primary beneficiary, you'll also need to decide how much of the payout each person will receive. We typically recommend thinking in percentages here, not dollar amounts, in case the value of your policy changes over time, such as with a universal life policy.

If you want to plan for the possibility that your primary beneficiary will die before you, you’ll need to name one or more contingent beneficiary.

What is a contingent beneficiary?

If you find you have multiple beneficiaries in mind, consider working with a licensed insurance agent who can help you build the right beneficiary structure for your goals.

Per stirpes vs. per capita beneficiaries

Setting up your primary and contingent beneficiaries is essential, but two additional designations can affect who ultimately receives your life insurance payout. If you'll pardon our Latin, we'll explain how designating beneficiaries as per stirpes or per capita can influence what happens if one or more recipients passes away before you do.

Per stirpes, roughly translated, means “by branch” or “by line.” In life insurance, this term refers to a family branch or line. If a per stirpes beneficiary passes away, the life insurance payout will go to that person's heirs.

Per capita means “per head” or “per person.” If a per capita beneficiary dies, this person’s share of the payout will be distributed among your remaining beneficiaries of the same level (primary or contingent) instead.

To paint a clearer picture of your options and how they might work, let’s use the canvas of “Star Wars,” circa The Force Awakens: Say you designated your old Rebel Alliance buddies, Leia and Han Solo, as primary beneficiaries, with each receiving half of your $1 million payout. But you designate Leia a per stirpes beneficiary and Han a per capita beneficiary. And just in case they both die (fighting The Empire is dangerous business, after all), you designate Luke a contingent beneficiary because he’s been off doing his own thing who-knows-where.

When you pass away, here’s what might happen, based on who’s still around to collect your death benefit.

As you can see, the differences between per stirpes and per capita could be life-changing for the loved ones you'd leave behind if you died. 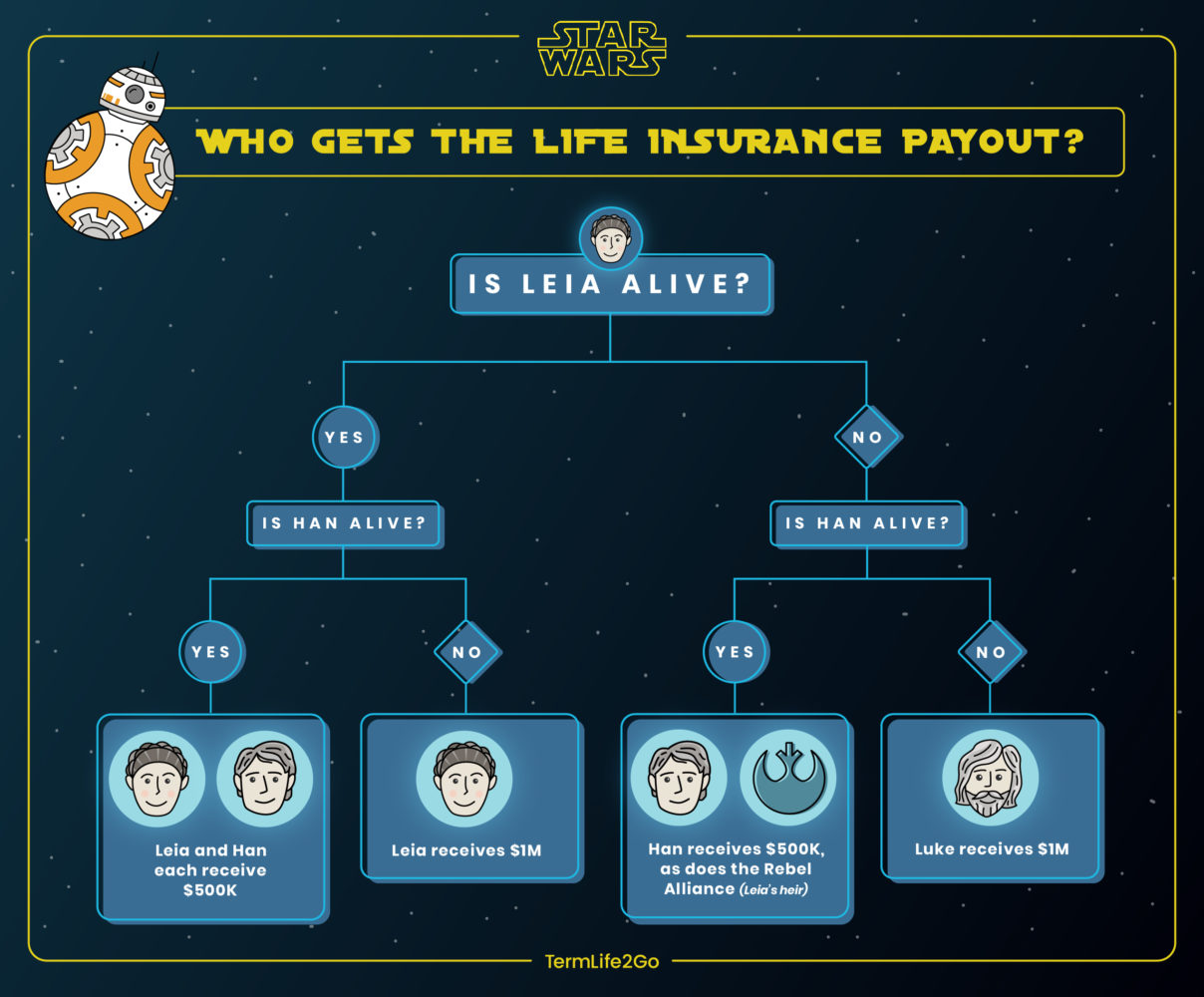 Don’t put off naming your beneficiaries

Primary, contingent, per capita, per stirpes … if you have multiple beneficiaries, it can get complicated. But don’t let that be a hurdle between you and the coverage you need.

Explain your goals to a licensed agent, and they'll make sure all the paperwork gets done correctly, according to your wishes. You can start by comparing life insurance quotes.

Most beneficiaries receive a tax-free payout unless your estate is quite large. Learn more about the estate tax and how that could affect life insurance payouts.

What if I don’t designate a beneficiary?

If you don’t choose a beneficiary, or those you have chosen die before you, your payout will become part of your estate. There, it may be subject to probate and creditors like the rest of your estate.

Can I designate a secret beneficiary?

Yes, you can keep your beneficiary choices a secret. However, doing so might prevent them from receiving the payout. Insurers are required to reach out to your beneficiaries, but only if someone notifies the company of your death. If your loved ones don't know they have a payout coming, they may not know to inform the insurer of your passing.