Our findings, correlations, and fun facts. 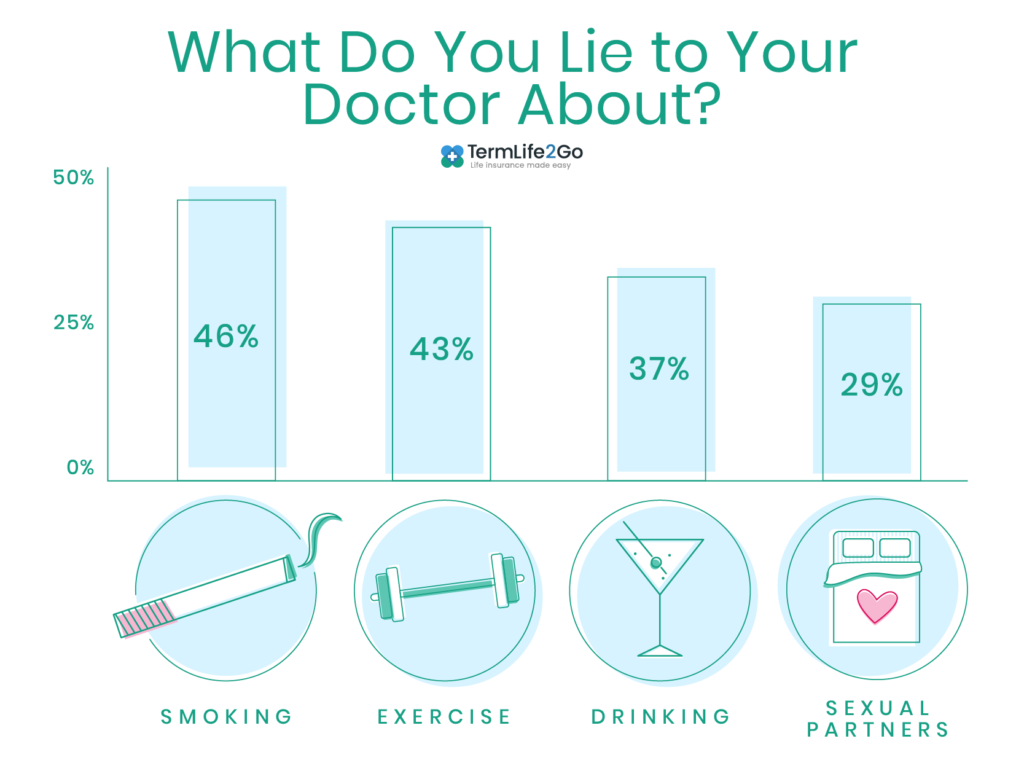 We surveyed 500 people to find out if they’ve ever lied to their doctors, and 23% said they have. Here are some of the white lies, stretched truths, and complete fictions they admit to telling:

(You may notice these don’t add up to 100%. That’s because some participants lied about multiple topics!)

Around 14% of Americans smoke, according to the CDC.1 We found it interesting that nearly that same percentage (a total of 10% of the 500 we surveyed) admitted to lying to their doctors about smoking.

Additionally, more men lied to doctors about alcohol consumption than women (50% men vs. 32% women). Interestingly, men are nearly twice as likely as women to binge drink (23% vs. 13%, respectively), according to the CDC.2 On the flip side, women were more likely to lie about sexual partners (33% women vs. 21% men).

But why this gender difference? We asked a doctor for his two cents on the matter:

“Our culture sets up certain norms for men and women and patients either consciously or unconsciously try to meet those norms . . . they will tell you what they think you want to hear and they base that off of culture norms. “I try to eat healthy, I exercise daily, I don’t do drugs.” What men and women see as acceptable behavior is different but . . . when you really get to the truth . . . most people are very similar and it is not what culture tells us is normal.” (Dr. Clark Madsen, MD)

Oh, but there’s more. We broke down our data by age group:

So why are people lying to their doctors?

We’ve established that some people embellish with—or lie to—their MD. But why? For three out of four people, it’s to avoid embarrassment. But a quarter do for other reasons:

Of those that admitted to fibbing to their physician, the group that lied to avoid discrimination was overwhelmingly female (80% female, 20% male).

Dr. Madsen prescribed some wisdom to anyone struggling to be forthcoming with their doctor:

“It is important to understand that your doctor has no other motives than to help you. We do not work for the government trying to find misdeeds and the only time law enforcement is involved is when the patient is a harm to themselves or others. We have the patient’s best interest at heart and will give you honest and useful information but only if we have accurate data to help us make decisions. Patients need to understand that when they see a doctor they are first and foremost paying for accurate advice. The medications and procedures are secondary. If you aren’t honest with your doctor you have wasted the main benefit of seeing us and the copay you paid to be there.”

How about you—do you lie to your doctor? Are you truthful, but still feel uncomfortable telling all? Or have you stretched the truth with your physician because your mom was in the room—or maybe your spouse? You can tell us the truth—in the comments.

Written by
Alex Enabnit
Alex is a licensed life insurance agent who has appeared on Yahoo Finance, HealthPopuli, and Good Morning Arizona. He writes factual, useful, and occasionally amusing articles about life insurance. Believe it or not, he enjoys researching the intricacies of life insurance and helping people choose the best policies for their specific needs—almost as much as he enjoys kayaking and long hikes.
Read More
Check Out Recent Articles