The Ladder Strategy for Life Insurance: Is It Right for You?

Choosing the right life insurance can put you in a bit of a pickle. You want to protect your income and assets in case you die, but not at the expense of living life the way you want to right now. If your life insurance need is high, you’re older than 30, or you have health issues, getting enough protection could overthrow that balance.

Luckily, there’s a way to get maximum coverage when you need it most and less when you don’t—all while keeping your wallet from feeling empty today. We’re talking about using the ladder strategy for life insurance. If you’re willing to get a little more hands-on with your life insurance plan, this strategy could save you thousands on premiums without skimping on coverage.

What is the ladder strategy?

The ladder strategy is a way of stacking several carefully timed life insurance policies to boost coverage when you need more. Most folks buy several policies at once and time them to end when they need less coverage, like when they pay off their home. Others stagger their start dates, too, getting extra coverage when adding a child to their family.

Using the ladder strategy could help you avoid the high premiums that come with large, long-term, and permanent life insurance coverage.

Laddering involves having several term policies (say, 10, 20, and 30 years) at various coverage amounts, each wrapping up when one of your needs ends.

The ladder strategy for life insurance relies on the fact that most people’s coverage needs vary throughout life. You can use our life insurance calculator to estimate your own needs, but in general, the more financial responsibilities a person has, the more life insurance they need.

Who is the ladder strategy for life insurance for?

Laddering saves a lot of people thousands of dollars. It’s best for people in the following situations:

Who the ladder strategy is NOT for

Does laddering your life insurance sound good but a bit complicated? Then you’ve hit the nail on the head. Laddering isn’t for folks in the following situations:

If you’re a little more strategic and overlap several inexpensive term policies instead, you could get the life insurance coverage you need for half the cost.

All it takes is planning well and staying organized.

How much can you save using the ladder strategy?

If you use the ladder strategy, you could save enough to fund a perfectly respectable death benefit all on your own. The actual amount you keep, of course, depends on your unique situation, but many folks save tens of thousands of dollars. And if you're considering a whole life insurance policy with a high death benefit, your savings could rise to six figures if you use the ladder strategy instead.

That might sound too good to be true, but it’s not. 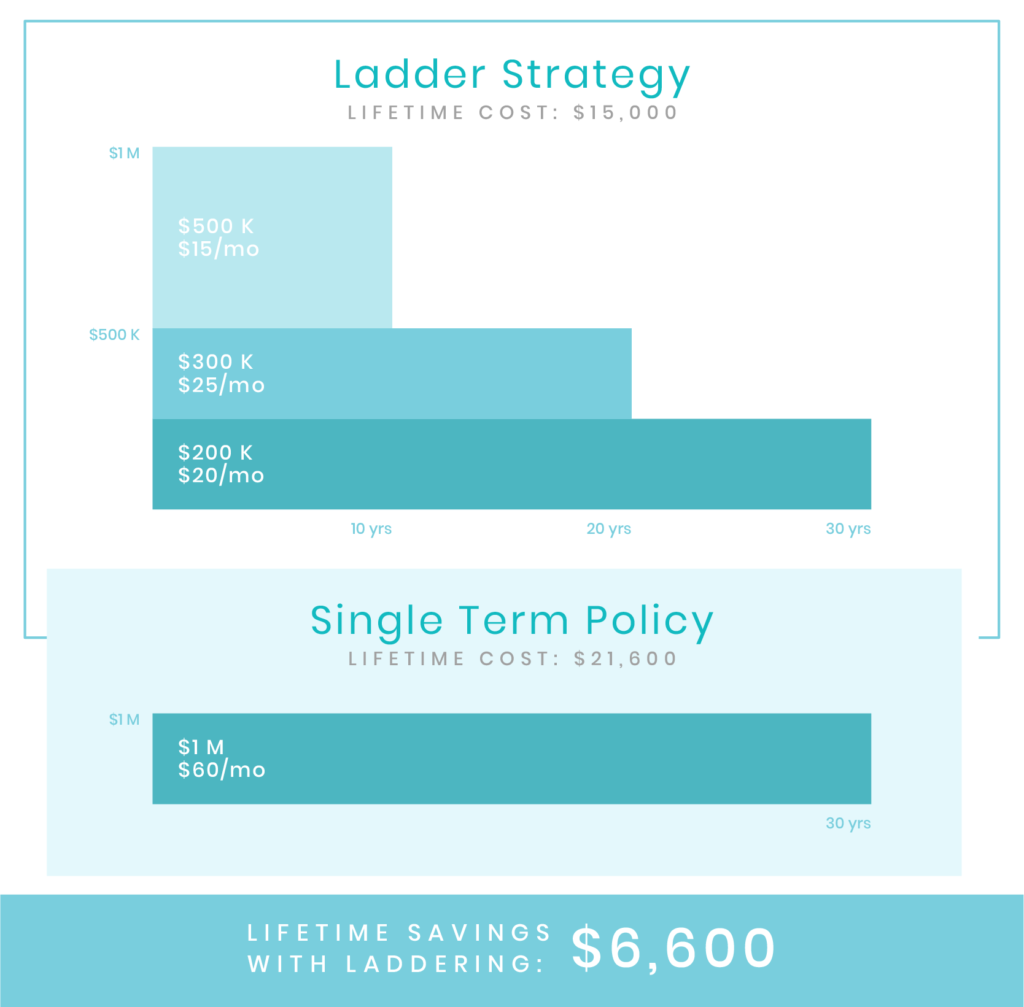 All rates provided by Clearlink partner as of 10/30/2018. Rates are for a 30-year-old male who smokes and has high blood pressure.

This laddering example begins with $1 million in coverage at a monthly cost of $60, which will decrease as term policies end. The entire sum this person would pay is $15,000.

If this person chose a single $1 million 30-year term policy instead, monthly premiums would also be $60, but they’d stay that high for the full 30 years and cost $21,600.

Without knowing more about your situation, we can't tell how much you could save using the ladder strategy. To get an idea, however, use the sample quotes from our Best Rates for Term Life Insurance to build an approximate ladder strategy for your needs.

How to save money using the ladder strategy*

Let’s look at what a 45-year-old family man could save with laddering. We’ll call him Jim.

Jim is in excellent health and qualifies for a Preferred Nonsmoker rate. He has two daughters, ages 11 and 15. Jim and his wife both work, and they just moved into a new home with a 30-year mortgage.

*Sample rates provided by Chris Abrams of Abrams Insurance Solutions as of 1/6/19. Rates have been rounded to the nearest dollar.

That comes to a cool $1.8 million of coverage.

But Jim doesn’t need all $1.8 million of coverage for the full 30 years. After 10 years, he’ll have saved up for his girls’ college. After 20, his retirement savings will take over income for the household. And after 30 years, he’ll pay off the house.

With the ladder strategy, Jim can cut his costs without compromising on coverage. Instead of a single, $1.8 million whole life policy, Jim could get the following term policies:

Alternatives to the ladder strategy

Some folks end up using this strategy by accident. They buy a big life insurance policy (like Jim's 30-year, $1.8 million dollar policy), only to realize a few years down the road that the premiums are too expensive. Or they realize they don't need as much coverage after all.

The good news is many insurers will work with you to cut back on coverage because they want to keep your business.

Many insurers put an age cap on their high-coverage policies, so you may not have the opportunity to increase your death benefit after celebrating a specific birthday.

If you can increase coverage later, you’ll likely pay a higher rate due to age. Prices tend to jump once an applicant reaches their 40s and could skyrocket at 50. And since people are more likely to develop health issues as they age, many folks end up with a much more substantial premium than if they’d taken out extra coverage a decade or two earlier.

“If you have lots of unanswered questions about the future,” says Stewart, “get the longest term you can afford now. Then, reassess down the line when things are clearer.”

How to get started with the Ladder Strategy

Does laddering sound like a good deal? Then let us help you get started.