In the era of the car, where everyone competes for the closest parking spots to avoid a longer trek, where people hop in their SUV and drive half a mile to the store, a new movement is starting—people are learning how to walk. Many Americans are trading their commute on wheels for treading on foot and, as it turns out, that choice is pretty good for their health. 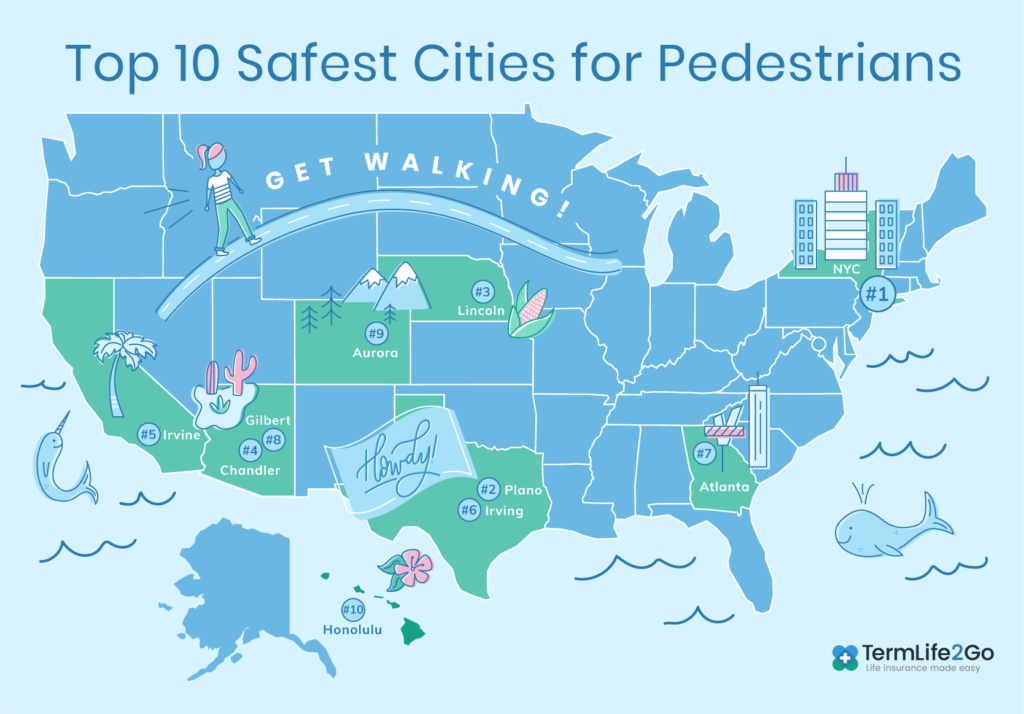 Narwhal, whale, giant “Howdy!” sign, etc. not to scale. That would be cool, though.

According to Harvard Medical School, a brisk walk can mitigate the impact of genes that promote weight gain. Walking can also lower risk of breast cancer in women, soothe arthritic joint pain, increase immune system function, and reduce cravings for sugary snacks.1 And walking doesn’t just promote physical well being, it can benefit mental health too, as walking can improve overall mood.2

Of course, health benefits aside, walking is only as safe as the drivers around you allow. Some cities are a paradise found when it comes to walking, and lucky you, we located them with our research. If you live in any of the cities below, you won the bipedal bingo.

How we got our rankings

To get our rankings, we started with the 100 most populated cities. Then we compared the number of pedestrian deaths to the number of workers age 16 or older in each of those cities to find which states are the safest for potential pedestrian commuters.

The lowest pedestrian death rates in America belong to New York City, making it the safest city for pedestrians.

New York City boasts 12,750 miles of sidewalk, making it a pedestrian paradise.3 The statistics back up the walkability factor too: 55% of New Yorkers in the Big Apple don’t even own a car.4 And why would they? With all that sidewalk and excellent public transportation, cars are more of a luxury than a necessity.

Arizona has two of the safest cities in the top 10: Gilbert (#8) and Chandler (#6)—and they’re right next to each other.

Certainly, Chandler and Gilbert are two wonderfully safe towns for walking around. However, we suspect the low pedestrian death rates in these sun-baked cities are likely due to walkers staying inside to avoid soaring summer temps. Nobody wants to walk outside when it’s 115°. That’s insane.

Source: I live here, and I’m not kidding; nobody walks outside from May to September. The people who do are tourists who think they can take the heat.

Just like Mesa and Gilbert, these Dallas suburbs are close to one another (is this a conspiracy??). Anyway, grab some BBQ then walk off the meat sweats if you’re in one of these Texas towns.

There was a tie for 10th-place between Honolulu, HI, and Virginia Beach, VA.

Pacific vs. Atlantic. East Coast vs… Westest Coast? These two cities are nearly 5,000 miles apart, but they’re both known for pristine beaches. However, only one of them has beaches you’d want to visit, let alone walk around on, in January. Plus, c’mon—it’s Hawaii. Tie goes to Honolulu.

Even if you don’t live in one of the top 10 safest cities for walking, that doesn’t mean you can’t get out and take a walk. And with the weather cooling down, you really should! Walking is good for your health, plus you might even meet a neighbor or two. Go ahead, give it a try.

Written by
Alex Enabnit
Alex is a licensed life insurance agent who has appeared on Yahoo Finance, HealthPopuli, and Good Morning Arizona. He writes factual, useful, and occasionally amusing articles about life insurance. Believe it or not, he enjoys researching the intricacies of life insurance and helping people choose the best policies for their specific needs—almost as much as he enjoys kayaking and long hikes.
Read More
Check Out Recent Articles